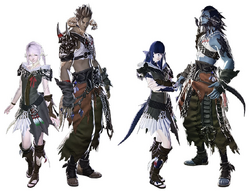 The Au Ra (pronounced OW-rah) are a playable race in Final Fantasy XIV: A Realm Reborn introduced in the expansion Heavensward. The Au Ra are the first game-original race.

Similar to the other races in Final Fantasy XIV, there will be two clans for the Au Ra: the lightly-scaled Au Ra Raen and darkly-scaled Au Ra Xaela. Yugiri Mistwalker, an Au Ra, is one of the leaders of the Raen and led a group of human refugees from Doma to Eorzea.

The curved horns and beautifully patterned scales that characterize the Au Ra oft give rise to speculation that this Hyur-like race native to the Far Eastern continent of Othard are, in fact, the progeny of dragons. This, however, has long been disputed, with scholars citing several distinct differences in the two races as evidence of decidedly dissimilar roots - the first and foremost being the enhanced hearing and spatial recognition granted by an Au Ra's cranial projections (traits not attributed to draconian horns), and the second being the gross disproportion in body mass between Auri males and females (again, a trait widely unseen in dragons).

Auri creation myth tells of a Dawn Father and a Dusk Mother from whom all Au Ra are descended. The Raen believe their veins to run thick with the blood of the former - their brilliant white scales and iron wills serving as proof of this divine lineage.

Unlike their sister clan, the Xaela, who bloody the land with their endless tribal conflict, the Raen have embraced a life of tranquility and solitude, long abandoning the nomadic lifestyle of their ancestors to settle the deep valleys of Othard's mountainous eastern reaches. Only on rare occasions will one emerge from the valley mists to seek adventure in realms afar.

Auri creation myth tells of a Dawn Father and a Dusk Mother from whom all Au Ra are descended. The Xaela believe their veins to run thick with the blood of the latter - their lustrous black scales and fiery wills serving as proof of this divine lineage.

Unlike their sister clan, the Raen, who lead solitary lives hidden behind the savage peaks of Othard's eastern reaches, the Xaela are free spirits who roam the vast western steppe in close-knit tribes hunting, gathering and warring as their ancestors have for countless generations. 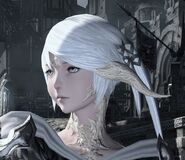 Add a photo to this gallery
Retrieved from "https://ffxiv.fandom.com/wiki/Au_Ra?oldid=10709"
Community content is available under CC-BY-SA unless otherwise noted.