The Land of Eorzea

Eorzea is a region within the world of Hydaelyn, which includes the continent of Aldenard and its neighboring islands. The region has great diversity in flora, fauna and climate. Rains will fall, winds will blow, and there will be transitions between day and night. Different regions exhibit their own specific weather patterns. In Eorzea, one day equals one hour in Earth time. 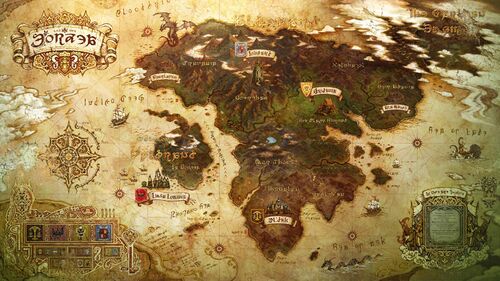 Calling the area home are several independent city-states, the most notable being Limsa Lominsa, bustling port and pirate hub; Ul'dah, a desert city rich in mineral wealth; Gridania, nested deep within an ageless wood; and Ishgard, bastion atop the mountains.

Throughout the realm can be found climates both harsh and mild, as diverse as the skies are vast. Bleak, desolate landscapes stretch to uncharted horizons, their uninviting expanses yet to be traversed. Colossal monstrosities stalk the land, as if mountains primeval had somehow stirred and risen. Of all the things Eorzea may be said to be, hospitable is not among them.

In the past, the city-states battled tirelessly, vying for domination and hegemony. Death-mongering beast tribes molested the land unchecked, leaving only destruction in their wake. Unseen enemies lurked beyond the borders, striking at the slightest provocation or show of weakness. The history of Eorzea is a tapestry woven of war and strife, stained with the blood of those gone before, and the tears and ash of fallen endeavor.

And yet the love the gods bear this unforgiving land endures, now as always. What is the allure of this seemingly forsaken place? With what hope and to what end do would-be inhabitants journey here to live out their days?

The answer lies with that which gives form to Hydaelyn and all myriad creation in it--crystals. The cornerstone of all things, it is these crystallized manifestations of the aether that beckon the people to come, risking all in the undertaking.

And so it is that adventurers too have harkened the call--to bear witness to the epic set to unfold in this land.

The mapping of Eorzea[edit | edit source]

"A map is as precise
As the malms walked in her making,
Yet I fear these feet
Have but far too few between them


May she serve faithfully
Any who would employ her for good,
And shun all who would fill
Her borders with blood

The vast realm of Eorzea, comprising the continent of Aldenard and its outlying islands, has seen the rise of a civilization with peoples as diverse as its environs. Throughout its history, the landscape has played home to a number of city–states – the tenuous relations among them fluctuating between friendly and hostile.

The pantheon of The Twelve is followed devoutly by most, and doctrine holds that the past wars of the realm were the wars of the heavens, with the gods and goddesses laying their favor with nations to champion them. In this way, war spread throughout the realm, discouraging unity and peace.

As a result, years passed without the lay of the land and its borders ever being mapped in their entirety. It was not until some 70 years ago, when an intrepid soul set out to wander the land, at great peril to himself, that the first map of Eorzea was completed.

Since then, the original rendering has been amended and improved by others, and the form it takes today is used by adventurers across the realm as an indispensable guide on their travels.