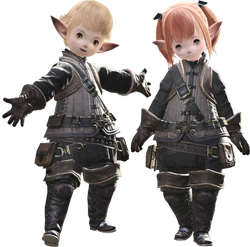 The Lalafell were originally a race of agriculturalists inhabiting the fertile islands of the south seas. With the introduction of transmarine commerce, they soon found their way to Eorzea via trade routes. They are now one of the more populous races and are well established throughout the region, though they remain averse to cold climates. The Lalafell place a great deal of significance on familial bonds, but are by no means unfriendly to outsiders. This is evidenced by the fact that they continue to share prosperous relations with all the other races of Eorzea. In The First, they are known as Dwarves.

A wee people sporing short, rotund bodies, the Lalafell appear as no more than children to the eyes of most. Many of these nimble little folk hail from the islands of the south seas, where they practice a simple agricultural lifestyle. It was not until the opening of maritime trade routes that the gradual migration of Lalafells to Eorzea began.

Now one of the most well-established races in the realm, Lalafells can be found in great numbers in nearly every city. Though Lalafellin culture places great emphasis on blood relations, individuals are known for getting along amicably with members of all races.

The short, rotund build of the Lalafell belie an incredible agility, and their seemingly feeble legs are capable of carrying them long distances over any terrain. Many among them are also known for possessing highly developed and cunning intellects.

From the flat landscapes of the Plainsfolk's home islands are where this Lalafellin clan takes its name. Their distinct hair coloration - a myriad of earthy and grassy tones - helps them to blend in well with their environment, acting as an effective camouflage against would-be attackers. It was the similarity of La Noscea's grassy fields to those in their homeland which drew the first settlers to the island of Vylbrand and what is now Limsa Lominsa. They are a clever and opportunistic people, and crafty with their words. The generally accepted view of Plainsfolk is that they are vibrant lot, with a penchant for excessive conversation.

Perhaps the most unique characteristic of the Dunesfolk is their luminous eyes - a result of a glossy, protective layer which covers the pupil, an evolutionary response to their homeland's glaring sunlight. Many individuals wear a small traditional gemstone on their forehead, a symbol of their zodiacal sign. They are adamant about scholasticism, placing the advancement of knowledge before all else. Other races tend to perceive male Dunesfolk as introverts who care more for books, business, and the prosperity of Ul'dah - a city-state built upon Dunesfolk ingenuity - than the goings-on of the rest of the realm.