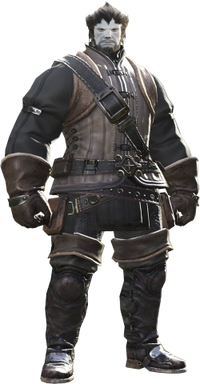 The Roegadyn are a maritime race whose largest concentrations are found in the northern seas, by way of which they came to Eorzea. They possess enormous, muscular builds and are known for the cultural emphasis they place on competition and unflinching courage, though tender, introspective individuals can also be found. In The First, they are known as Galdjent.

Known for their brawny builds and piercing eyes, the Roegadyn are the largest and most rugged of Eorzea's races. The majority of the realm's Roegadyn belong to the Sea Wolf clan, a maritime people who earn their keep on or by the sea, be it as sailors, fishermen, or pirates. Comparatively fewer in number are the Hellsguard, who are known for their more earnest demeanors and can often be found working as bodyguards and smithies.

Roegadyn in and around the Limsa Lominsa area are typically seamen putting in at port, but many have also settled permanently, becoming mercenaries, bodyguards, or even pirates by trade. Far away, deep in the Ul'dah, live mountain clans of reclusive Roegadyn known as the Hellsguard, said to have mastered the magical arts.

Long ago, no vessel or coastal village was safe from the fury of the Sea Wolves and their maritime brand of brutality. The mere mention of the clan was enough to strike fear into the hearts of any who drew their livelihood from the sea. The Sea Wolves originally hail from the islands of the far north seas, where they still subsist as fishermen and women. It was not until the large-scale deployment of Limsa Lominsa's armada that the Sea Wolves' appetite for piracy diminished. Now it is not uncommon to see them employed as sailors or naval mercenaries on all manner of vessels. However, they have never forgotten the ways of their homeland, and still use the ancient Roegadyn language in their names.

The Hellsguard are a Roegadyn clan with body and mind tempered by the unforgiving heat of the volcanic regions they inhabit. Believing these mountains of flame to be gates to the underworld, their line has for centuries stood vigil to prevent the passage of souls back to the realm of the living. As the harsh environs of their homelands produce little sustenance, the second- and third-born are often sent forth from their mountain villages, with many and more making their way to the great cities. It is there that their sheer girth and steely demeanors place them in high demand as soldiers and sellswords, allowing the young of even the largest families to surpass their elder siblings in prosperity.